The class of compounds, benzonitriles are highly valuable within a broad range of applications serving as important substructures in many agrochemicals, pharmaceuticals, dyes, polymers and other organic materials. The nitrile group (C:::N) is also a precursor to a variety of important functionalities in organic molecules. However, there is a reluctance to applying hydrogen cyanide (HCN or prussic acid) in an academic setting or an R&D laboratory, which is undoubtedly linked to the high toxicity and explosive nature of this gaseous one-carbon reagent, thereby complicating its handling, storage and transportation

They demonstrate the usefulness of this setup not only for the Pd-catalysed cyanation of aryl bromides, but also for the Ni-mediated hydrocyanation of styrenes as a test reaction. With respect to the cyanation reactions, good functional group tolerance was obtained, and the method proved amenable to scale-up, but also to carbon-13 isotope labelling applying H13CN. The methodology was tested on the synthesis of three pharmaceuticals containing a benzonitrile subunit, including dapivirine, citalopram and letrozole, providing isolated yields from 86–97%.

This work is funded under the SPIR initiative by The Innovation Fund Denmark (http://biovalue.dk/), and Haldor Topsøe A/S. 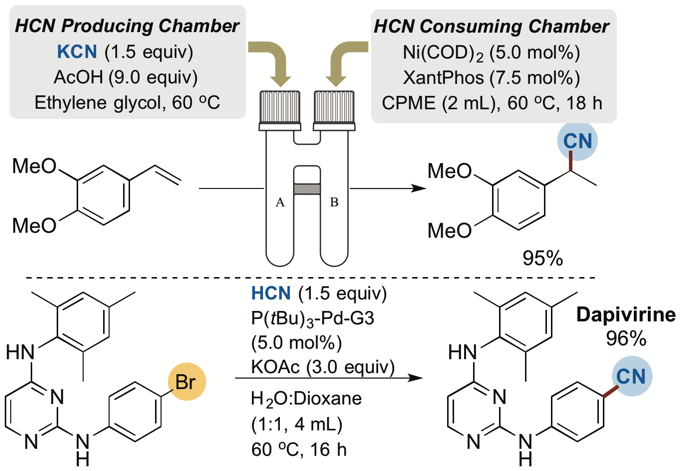